View our other locations

Whether you're a first time buyer, an existing home owner or an investor, we have schemes and advice on ways to buy your new Linden Home.

We work with local people to create communities and we’re passionate about building the right homes for our customers.

Our helpful home guides are full of useful tips and information. These short videos explain everything you need to know about your new Linden Home. 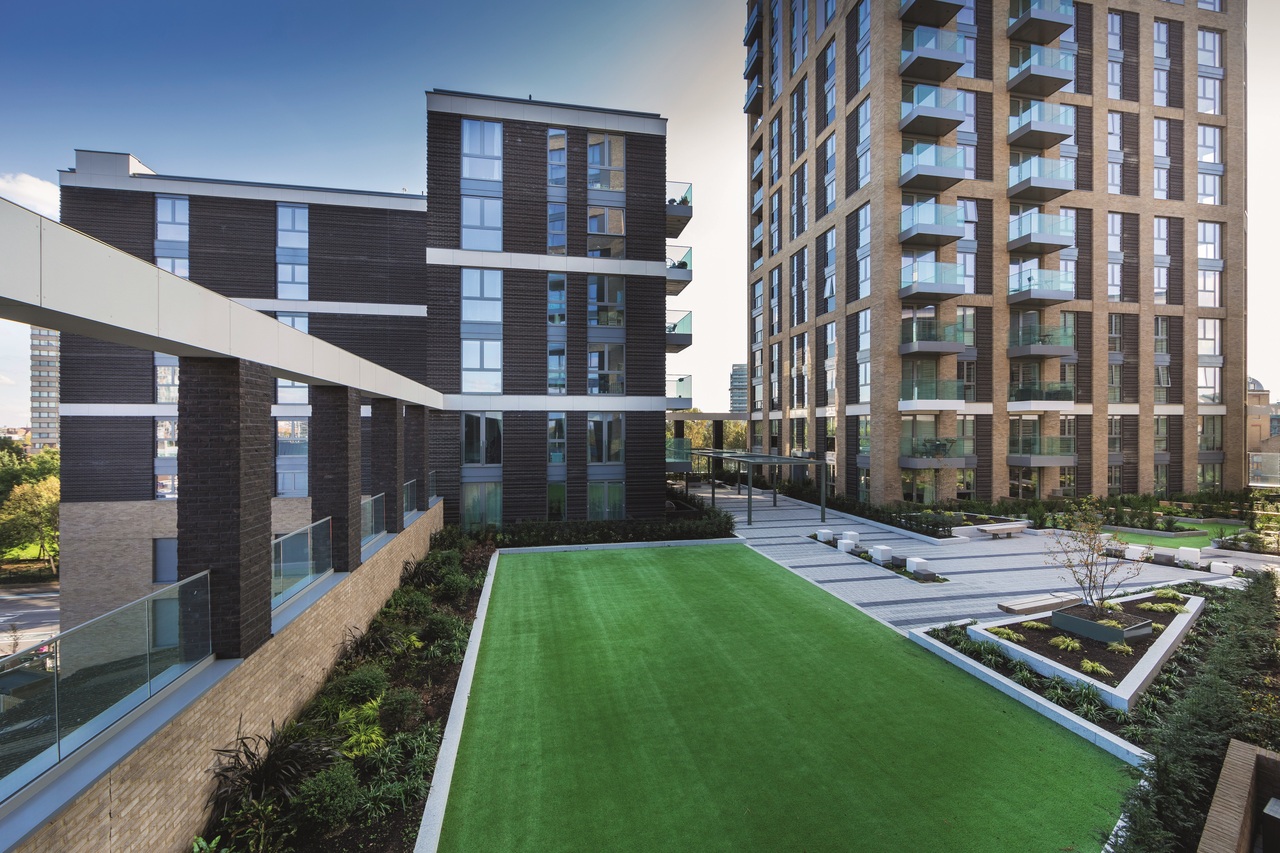 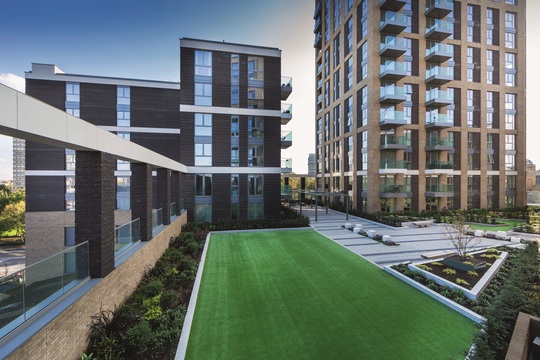 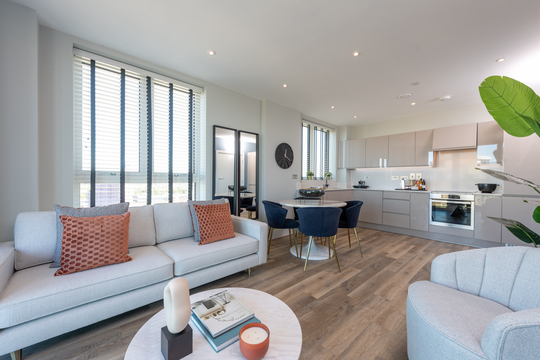 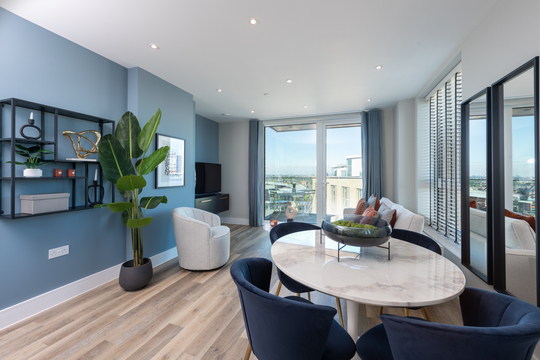 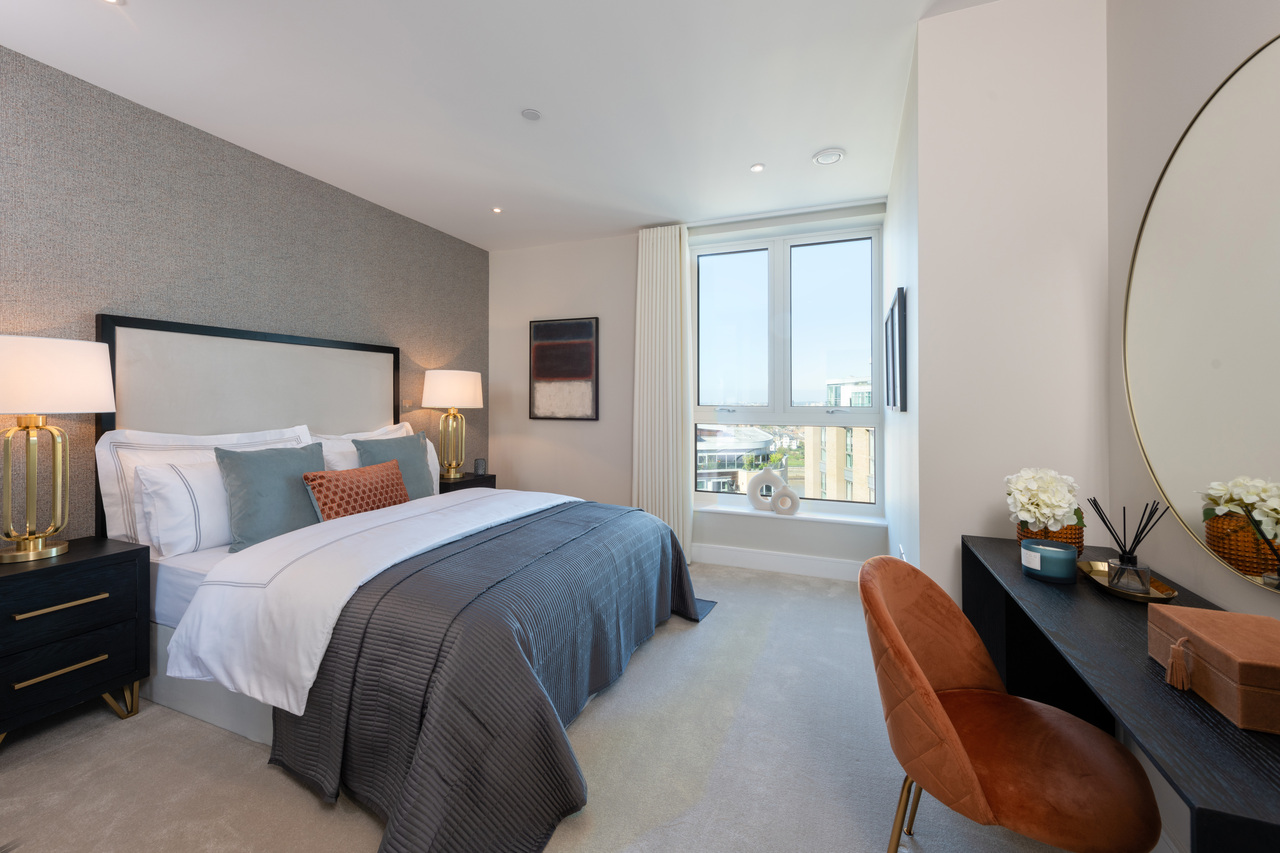 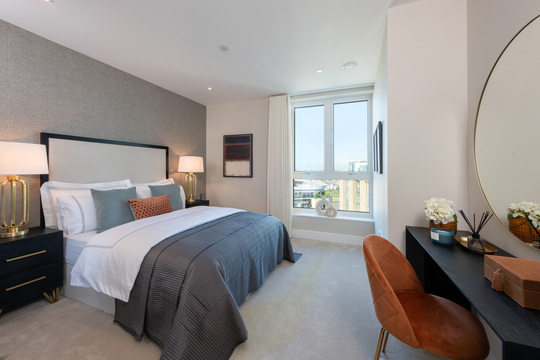 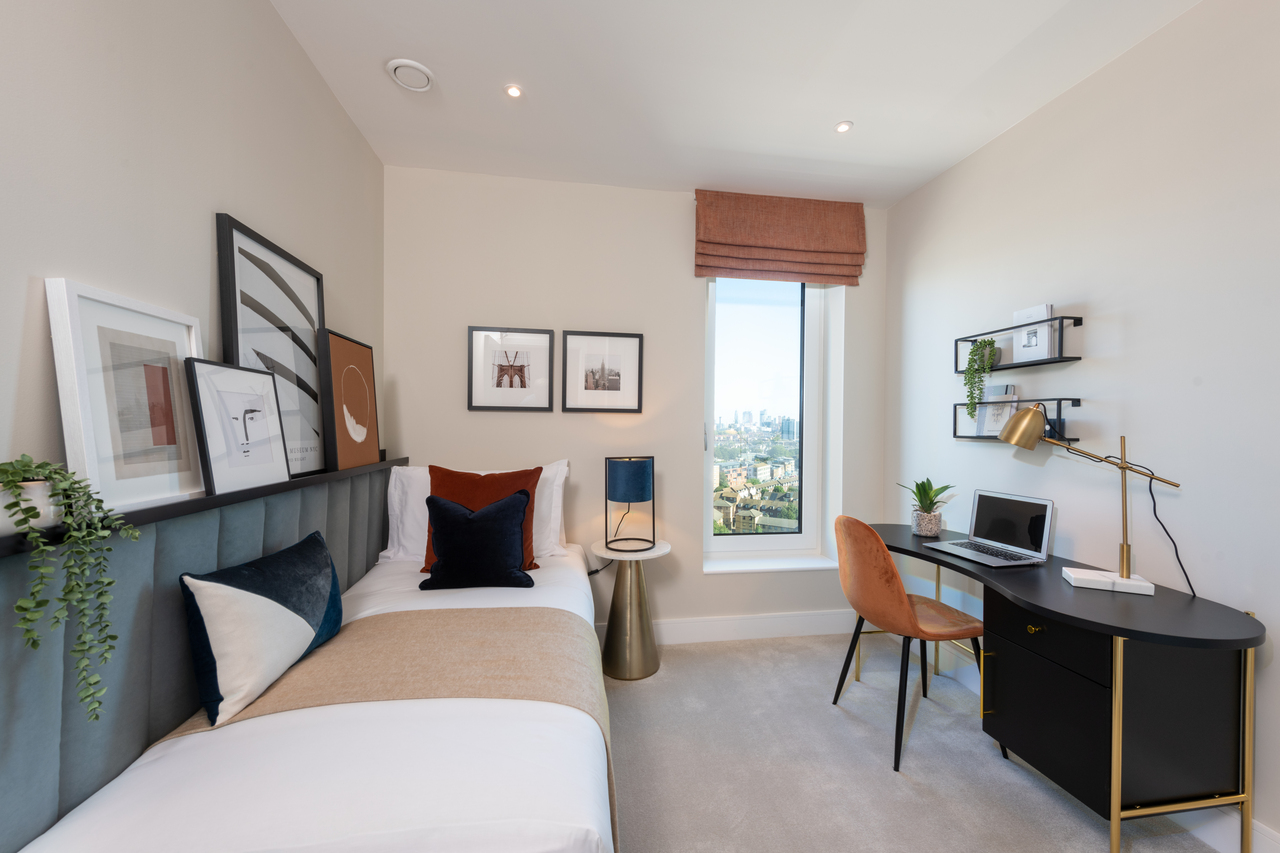 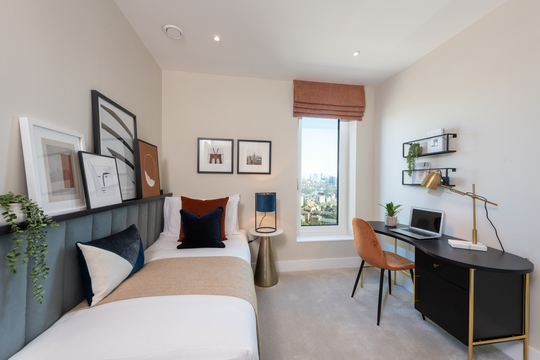 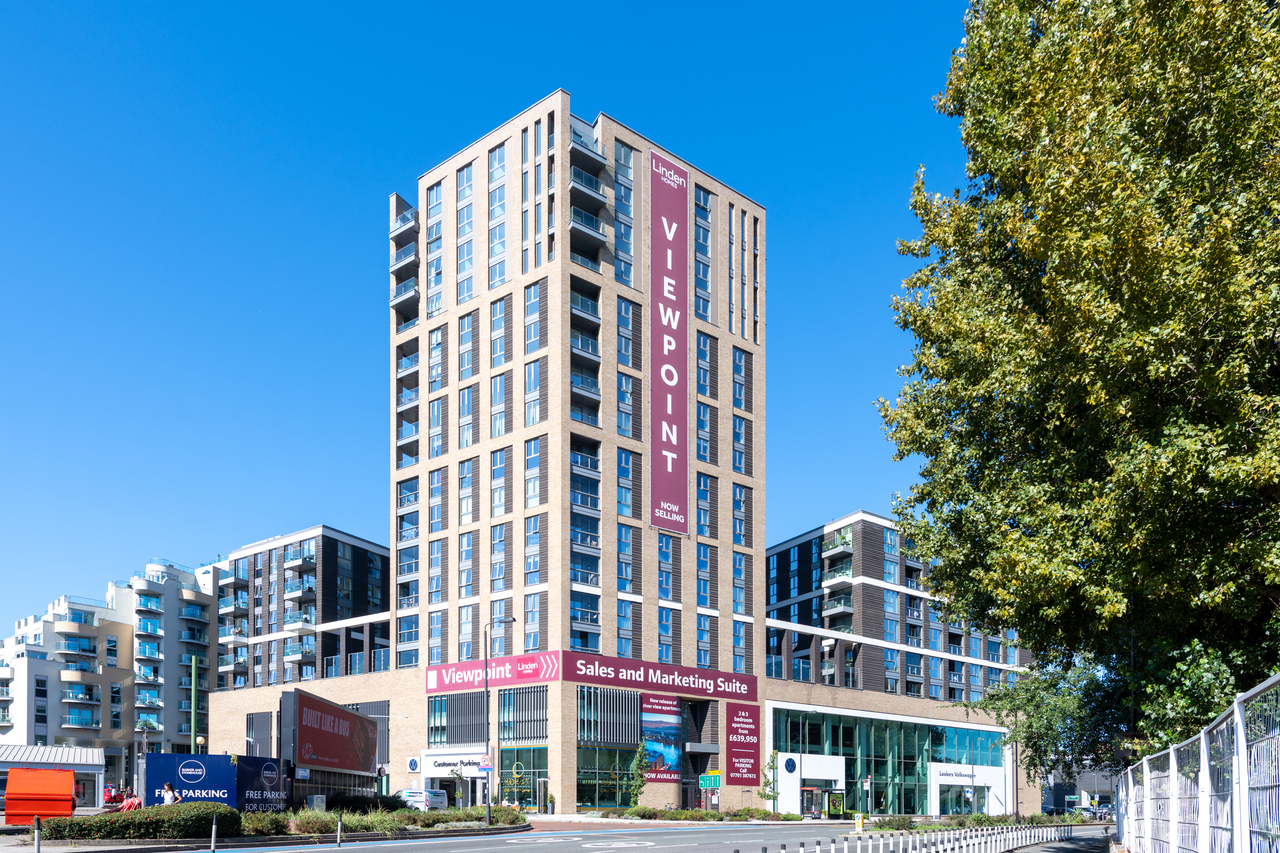 Reserve our stunning fully-furnished 3 bedroom show apartment, Home 53, and we’ll also pay your Stamp Duty, worth an extra £63,650! Ready to move into this summer.^* Contact us to find out how we can help to get you moving.

Choose our luxury 1, 2 or 3 bedroom apartments for sale in Battersea and you can enjoy a beautiful new home next to the river with spacious living areas, your own private balcony or terrace, and landscaped gardens exclusive to the development. All just a short stroll from Wandsworth Bridge & Chelsea.

A perfect location for commuters, you can look forward to being less than half a mile from Clapham Junction station, and just minutes from the A3 should you need to drive. With our luxury apartments just a short walk from Chelsea, this really is a superb opportunity to buy a wonderful new home in the capital.

Why buy at Viewpoint? Reserve our stunning fully-furnished 3 bedroom show apartment, Home 53, and we’ll also pay your Stamp Duty, worth an extra £63,650! Ready to move into this summer.^* 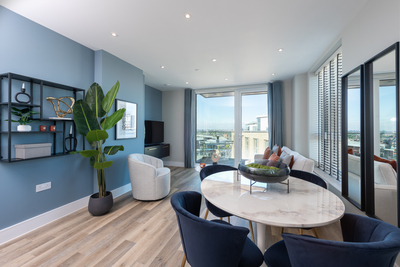 No homes available with these filters.

Why buy at Viewpoint?

Take a look at Viewpoint

City living with a village feel

Moments from the Thames, convenient proximity to good, local amenities and easy access via public transport to other popular areas of South London, Viewpoint is a superb choice for a new home. Add to this the concierge service, stunning views and excellent road links across and out of London, and there are even more reasons to choose Viewpoint.

Just a short walk away from Viewpoint is where you’ll find a good everyday amenities, including a supermarket, grocer, health centre and pharmacy. There’s also a wide range of eateries to choose from, with everything from simple coffee shops to bars to restaurants. One of the most popular evening hotspots is TWID Battersea, a live music cocktail bar and restaurant which offers extensive food and drink menus, with live entertainment four days a week. For something a little more chilled, The Anchor pub on Hope Street is a more traditional local pub, and is popular with locals and visitors alike.

Property for sale in Battersea benefits from having some great cultural and entertaining options for everyone to experience and enjoy. A little under 2 miles from home is Battersea Arts Centre. This beautiful old town hall building welcomes more than 100,000 visitors every year, and is a where you can watch numerous plays, take part in social dance classes or listen to talks on a huge range of subjects. The centre is a significant part of the local community, and actively encourages children and young people from around the area and beyond to get involved in the variety of workshops held each year.

A short distance north of the arts centre is Battersea Power Station, one of London’s most iconic buildings. This now decommissioned coal-fired power station once supplied power to thousands of homes in the capital, but is now undergoing huge redevelopment. Plans are in place to create a wide range of shops and eateries, and will attract visitors and locals from all over the city and beyond.

What will I find close to Battersea?

Flats for sale in South London benefit from being close to other popular parts of the capital. One such area is Clapham, around 3 miles from Viewpoint. Clapham High Street is ideal for shopping, services, entertainment and dining out with family and friends. Shops here are in abundance and range from well-known high street names to independents, including supermarkets, health and beauty shops, a cycle shop and bookshops. There are also several banks, a post office and a church all close to the high street. Dining out is easy, whether you’re looking for a quick coffee, lunch or brunch or even a full evening meal. There are so many different cuisines on offer here - and with every budget catered for - that finding something to eat and drink is a simple. Plenty of bars, clubs and pubs can also be found here, so simply socialising over a few drinks is easy. For entertainment, the Picturehouse cinema is just off the high street, showing the latest film releases and live streams of theatre productions from the National Theatre and Royal Opera House. If live music is more your sort of thing, Venn Street Records is close to the Picturehouse, and is a great place to listen to live music over a pizza and a cocktail or two. With so many options available in a relatively small part of South London, it’s easy to see why people search here for flats for sale.

Battersea is ideally positioned for good transport links around the capital and beyond, either by rail or road. Living at Viewpoint will give you three rail stations within a mile of home; Wandsworth Town, Clapham Junction and Imperial Wharf. From these, simple access to locations including London Waterloo (20 minutes), Guildford (approximately 45 minutes) and Shepperton (1 hour) can be made. With good links into London, this allows for further journeys to be made around the south; the South Coast for example can be reached in around 2 hours from Clapham Junction. For road travel, there are several ‘A’ roads close to home. The A3 is just a few minutes away, which allows for simple journeys to Guildford, central London and a vast number of locations via links to the A10, A12 and M25.

What will I find beyond Battersea?

Approximately 10 miles east of Viewpoint is the historic area of Greenwich, which is known for its maritime history. The National Maritime Museum is set in the beautiful grounds of Greenwich Park, which is home to a vast number of artefacts and portraits from events including the First World War, the Battle of Trafalgar and the Battle of Jutland. You can also visit the world’s only surviving tea clipper - the Cutty Sark - here, which has been preserved over the years and is one of London’s most visited sites. Set further within the grounds of the park is the Royal Observatory. With plenty of history and royal heritage to explore, as well as discovering how Greenwich Mean Time became a measure of time, you can also stand on the Prime Meridian line, a reference point on maps and charts used by ships during the 19th century. The park is also home to many tombs, a planetarium, a bandstand and Roman temple ruins. It is a vast green, open space that also allows for some relaxing time in the open air; there is also a tea house here, so getting something to eat and drink is simple.

Greenwich is also a great place to head to for shopping, dining out and entertainment. There are plenty of well-known and independent restaurants, cafes, pubs and bars, as well as art galleries, a cinema and the popular Greenwich Market, which has stalls selling everything from arts to jewellery, and from crafts to beauty. Established in 1737, this is one London’s best covered markets and welcomes thousands of visitors throughout the year.

Less than 5 miles from Viewpoint is the beautiful open landscape of Richmond Park. One of the Royal Parks, this is where you’ll find fantastic open spaces and grasslands to explore and relax in. You’ll find deer herds here too, along with ancient trees and rare species of birds, bats and wildflowers. The park enjoys protected status and is London’s biggest Site of Special Scientific Interest, so there is always something new and different to discover here.

Get directions to Viewpoint Stuck in a chain or have a home to sell? We could buy your current home when you buy one of ours with Home Exchange.

Have a home to sell? We could help sell it for you, so you can buy one of ours with Smooth Move! We could even save you time and money.

Stuck in a chain or have a home to sell? We could buy your current home when you buy one of ours with Home Exchange.

Have a home to sell? We could help sell it for you, so you can buy one of ours with Smooth Move! We could even save you time and money.

^Stamp Duty paid offer on selected homes only and for a limited time only. Not in conjunction with any other offer. Terms and conditions apply. Paid as a cash lump sum allowance upon legal completion. Not applicable to second home owners or investor purchasers.

^*On Linden Homes South East selected homes and developments only. We reserve the right to refuse any offer.

†Home Exchange is available on selected homes only. Acceptance is at our sole discretion and not all properties are suitable. We reserve the right to refuse to agree to Home Exchange of your current home and we are under no obligation to give reasons why. Home Exchange may not be available in conjunction with any other offer and is also subject to the terms of your Reservation Agreement with us. As a guide, your current home must not be worth more than 70% of the value of your chosen Linden home. Reservation fees may vary. For full terms and conditions please click here."

All images are used for illustrative purposes only and are representative only. They may not be the same as the actual home you purchase and the specification may differ. Images may be of a slightly different model of home and may include optional upgrades and extras which involve additional cost. Individual features such as windows, brick, carpets, paint and other material colours may vary and also the specification of fittings may vary. Any furnishings and furniture are not included in any sale. Please check with our sales consultants for details of the exact specifications available at the development(s) for each type of home and the associated prices.